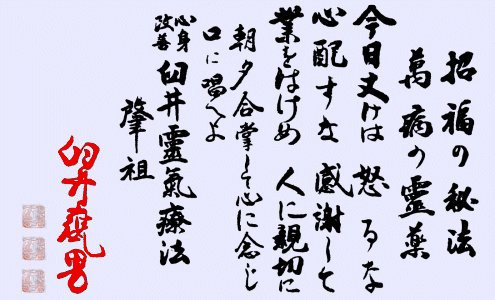 These notations are from Rick Rivard at Threshold Reiki who is an accurate presenter of current Reiki systems, with correct information regarding Dave King.

As of 2001 there were several of Usui Sensei’s students who are still alive in Japan. Dave King shared this with me and asked me to post the following at the urri@yahoogroups.com list. “In 1971 Melissa Riggall and I studied the Usui system in depth (in Morocco)  with Yuji Onuki, a student of Eguchi. In 1994 Melissa and I visited Japan to meet with the grandson of Onuki. We were introduced to five elderly persons who had actually studied with Usui-sensei in Tokyo. One of these was a Tendai Buddhist nun who was born in the 29th year of Meiji (1897) and had trained with and assisted Usui-sensei from 1922 until 1926 and remembers his departure for Fukuyama. The nun confirmed that Usui had received Tendai training at an early age and remained Tendai all his life. She was not given printed handouts (photocopying at that time was in its infancy and paper sizes were not then standardized). At a later visit I attended a Japanese Reiki (Vortex school) workshop given by Toshitaka Mochizuki in Tokyo. I then travelled on my railpass and chanced to meet a student of Hayashi named Tatsumi who studied until 1931. Details are available at http://www.usui-do.org. Melissa returned to Japan later to await a permit to enter a restricted area of China to do research. She spent some time with Tatsumi and met further students of Usui, Hayashi and Eguchi during that time. We will be told when we can release information. Last week (early May, 2001) we received permission from the nun to make her existence public. We hope that readers of this list respect the privacy of a 104 year-old woman in Holy Orders and make it clear that a source of information will be lost as a result.” Dave also said that the lady attained the 2nd highest level that Usui-sensei taught and she also knew Dr. Hayashi.

According to Tenon-in, the oldest surviving Usui student, affirmations (see above) were brushed by O-Sensei (Usui) in April 1921, 4 years before the creation of the palm healing system taught by the Usui Reiki Ryoho Gakkai (society). Another interesting note about the affirmations is that they actually help to define the term “Reiki” as used by O-Sensei.  If you have assisted with translation of Japanese material you will know that you cannot simply look up Japanese words in a dictionary and get an accurate meaning.  Their true meaning depends on the context in which they are used.  For many years people have simply defined “Reiki” by the independent translation of the words “rei” and “ki.”  In 1995/96 Dave King and Melissa Riggall met a senior student of Dr. Hayashi named Tatsumi.  He had trained with Hayashi-sensei from 1927 to 1931, completing the hand healing system as well as the original Usui-Do spiritual system to the highest levels (beyond what we think of as Shinpiden, to Shichidan).  Melissa actually lived with the Tatsumi family for a month and learned the complete Usui-Do system. Both she and Dave were granted the highest level of Shichidan.  One day Melissa pointed to a photo of the original affirmations in Tatsumi-san’s house.  She noted the term “Reiki” and said that this was how the West referred to the hand healing system.  Tatsumi-san said that the healing was simply referred to as te-ate (hand healing), and that by using the term “reiki,” O-Sensei had been referring to his ancestors.  Dave explained “Usui Reiki Ryoho” in more detail to me saying “More accurately ‘Usui therapy for connecting with your ancestral self'”

Dave King moved to China in November 2004 but still travels internationally to hold classes.  Laurie Anne King lives in Australia and may still hold a dojo there.

When several navy admirals (including Usui Reiki Ryoho Gakkai founders Ushida-sensei and Taketomi-sensei) joined Usui Sensei’s classes in 1925 there was a sudden shift in the class structure.  Perhaps due to their social standing they had more sway in the dojo, but a new system of personal energy work began to emerge alongside Usui-Do.  The new system included Eguchi-sensei’s hand healing concepts and his energy transfer ceremony (which Usui Sensei found to be of a religious tone) and the admirals were calling this Usui Reiki Ryoho (a phrase from the original Usui concepts or precepts).  They also began these meetings with some Meiji Emperor poetry (gyosei) – probably to make the meetings appear loyalist and not religious (which was outlawed at the time of the Taisho emperor.)  They added a healing guide for beginner students (by Hayashi-sensei) to their material, as well as a number of Tui-na and Qi-gong or Kikou techniques that Eguchi-sensei had introduced from a booklet he had produced. After Usui Sensei’s passing in 1926, Usui-Do seemed to slowly slip from the limelight as the new society Usui Reiki Ryoho Gakkai began to grow in numbers. The spiritual concepts were retained to some degree, but mainly taught to the advanced members, with personal healing through “Reiki” being encouraged on the novice. After 1931 Hayashi-sensei, who had by then left the URR Gakkai, no longer seemed to teach the original inner system of Usui-Do, although he had conferred Shichidan status on at least 12 students, including Tatsumi-san (1927-31).  Eguchi-sensei also left the URR Gakkai (even before Hayashi-sensei) but he continued to teach both systems and one of his Shichidan graduates was Yuji Onuki-san (1926-30).   The system that Hawayo Takata-sensei learned from Hayashi-sensei (1935-38) was a much revised version he was teaching at that time. Dave King and Melissa Riggall of the Usui-Do Eidan received Rokudan from Onuki-san in 1971, Shichidan from Tatsumi-san in 1996 and Godan (3rd highest level) from Tenon-in in October 2002, the latter giving them a direct spiritual connection to Usui Sensei through her.  Note: Melissa Rigall made her transition on March 12, 2003. She and her contributions to Reiki will be greatly missed.  Sources: Dave King, George Mullen (who also received Godan from Onuki-san in 1971).

What is Usui-Do?  ”Unity of self through harmony and balance”  (Usuidojo motto) The system of Reiki we now practice in the West actually comes out of 3 Japanese sources, all of which were influenced heavily by the Usui-Do system taught by Mikao Usui. These are Usui Reiki Ryoho Gakkai, Hayashi Reiki Kenkyukai and Tenohira Ryoji Kenkyu-kai. In the final years of his life, Usui Sensei was teaching his personal spiritual system, Usui-Do, which by this time included several levels of achievement, the naming convention having been influenced by Sensei’s good friend Jigoro Kano, the founder of Japanese Judo. The levels were rokyu, gokyu, yankyu, sankyu, nikkyu (#1 symbol), ikkyu (#2), shodan (#3), nidan (#4), sandan, yondan, godan, rokudan, shichidan (nanadan) Another influence in his life was his friend Toshihiro Eguchi who had his own hand healing methods, and who often taught some of these ideas in the Usuidojo (Usui training hall). Eguchi-sensei later had his own school called Eguchi Tenohira Ryoji Kenkyu-kai Eguchi-sensei and Hayashi-sensei (founder of Hayashi Reiki Kenkyukai) were the only 2 students to complete the original Usui-Do training (Shichidan level) and for many years they continued to offer this system to some students along with their own Reiki systems. Women were traditionally not allowed to attain the highest levels in Japan but the 2 nuns who worked with Usui Sensei from 1920 to 1926 reached the 2nd highest level of Rokudan. One of these is Tenon-in (Mariko-Obaasan), who is over 105 years old.